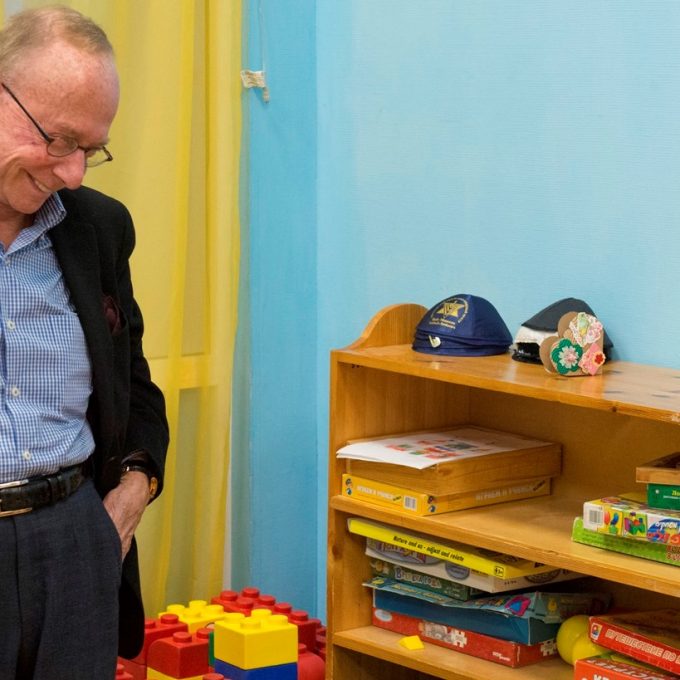 ORT had barely been established in St Petersburg when a poor Jewish family in the Pale of Settlement sent their son to Bialystok in the hope of an education. But a quota had been placed on Jews in schools and the boy was unable to enrol. Without the money for a private tutor the boy’s future looked bleak. Fortunately, three educated men were found who each volunteered some of their spare time to teach him. After five years he left for the Goldene Medina and became a successful lawyer.

For the first Jewish member of the US Supreme Court, Louis Brandeis, the three men who took it upon themselves to teach that young man realised that

“education was not a thing of one’s own to do with as one pleases – not a personal privilege to be merely enjoyed by the possessor – but a precious treasure transmitted upon a sacred trust to be held, used and enjoyed, and if possible strengthened – then passed on to others upon the same trust.”

It is this realisation which spurs us on to support ORT, enabling it to act as our agent and transmit the knowledge and skills by which new generations can earn a living and achieve success.

So it is that we have seen a year marked by expansion and cooperation, a growth in our reach and in the family spirit of our organisation. 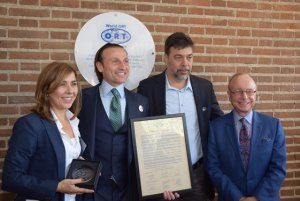 Dr Giles, right, at the ceremony accepting Estrella Toledano into the ORT family. With him, from left, are Principal Luna Alfon Coriat, Madrid Jewish Community President David Hatchwell Altaras, and the Chair of World ORT’s Board of Trustees, Dario Werthein.

For the first time, the ORT network has become established in Spain where Madrid’s only Jewish school, Estrella Toledano, is now a proud and enthusiastic participant in our mission. In Israel, World ORT Kadima Mada continues to receive kudos from national and local authorities for its ever-growing contributions to the country’s greatest resource – her people. There, too, we have welcomed a new school to the network – Ulpana Bikat Hayarden – which with our help aims to triple its enrolment over the coming five years.

Growth, too, in Ukraine where our school in Kiev has opened a kindergarten that will strengthen its ability to stem assimilation by providing continuous education right through from pre-school to matriculation. Our role as a buttress of Jewish identity in the Former Soviet Union cannot be overstated. Yes, we provide a superb STEM and general education thanks to which our students can make good careers. But we believe there is more to education than that. As Louis Brandeis so eloquently put it a century ago:

“Our Jewish trust comprises also that which makes the living worthy and success of value. It brings us that body of moral and intellectual perceptions, the point of view and the ideals, which are expressed in the term Jewish spirit; and therein lies our richest inheritance.”

Underpinning these achievements has been a deepening appreciation among our constituents of how we can work together more closely. ORT Mexico,  for example, staged Israeli music icon Shlomo Artzi at Madison Square Garden in collaboration with World ORT which, in turn, has also seen greater fundraising cooperation with ORT America.

And our operational organisations in Latin America held their first ever continental conference which not only served to highlight the high impact work they do but also contained within it the seed for ever closer ties.

We have been delighted to host missions of our friends at the Jewish Federations of North America at our schools in Buenos Aires, Madrid, and Kfar Hasidim and we look forward to welcoming them again in the coming year in Panama and Cuba.

With so much progress on so many fronts we can rightly feel optimistic, even while taking nothing for granted. And that sense of excitement is enhanced by Avi Ganon’s appointment as the new Director General of World ORT.

Avi’s declared aim is to see that World ORT enjoys its rightful place among the Jewish community’s organisations. He is well known in the ORT family for his work in Russia and Israel and we look forward to seeing the results as he applies the same amazing energy at a global level.

In 1949, Albert Einstein exhorted the American Jewish community to support the struggling State of Israel. He was a great admirer of ORT and so I am sure he would have allowed me the liberty of applying the conclusion of his address to the work with which, to paraphrase him, we at ORT are so nobly engaged:

“It must not happen that this magnificent work breaks down because the Jews of this country do not help sufficiently or quickly enough. Here, to my mind, is a precious gift with which all Jews have been presented the opportunity to take an active part in this wonderful task.”

I want to take this opportunity to thank all of you for contributing to ORT’s wonderful task of Educating for Life over the past 12 months, in particular Shmuel Sisso who returned to Israel after four productive years as Director General and CEO. Our accomplishments have been your accomplishments. But I would also urge you to grasp the opportunity to continue taking an active part in that task in the coming year. Together we can – we will – create more opportunities for more people in more communities in 5778!

On behalf of everyone at World ORT I wish you and those dear to you a sweet, healthy and successful year.