ORT leaders believe the historic 70-for-70 mission to Israel will have an ‘energising’ effect on supporters and volunteers.

The mission, celebrating the 70th anniversary of Israel’s independence, was the biggest group tour ever organised by the global education network.

The event began on October 18 with a visit to meet President Reuven Rivlin, who praised ORT supporters for the backing they have given education in Israel.

Among the highlights of the mission, which ended on Sunday night, were tours of World ORT Kadima Mada schools and programmes across the country, where delegates saw how the organisation is connecting people, professions, generations and communities.

The trip was not without its moments of drama. During a visit to Netiv Ha’asara, a moshav in southern Israel close to the Gaza border, delegates were forced to rush to bomb shelters after red alert warnings of rockets being fired on the area.

Conrad Giles, World ORT President, said: “It is difficult to imagine – much less put into words – my feelings regarding the impact and importance of the just-completed 70-for-70 mission in Israel.

“From its first moments until the exciting final dinner we were treated to an energising and educational experience. The opportunity to see our work and hear from dozens of incredible youngsters profiting from our activities will certainly materially affect each mission participant.

“Our collective ability to enable the youngsters we are educating by interacting with them and hearing their stories and expression of thanks will undoubtedly increase the commitment of the individuals on the mission.

“It was a great several days spent with wonderful and dedicated volunteers, which will long be remembered for its impact.” 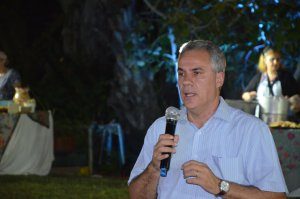 Avi Ganon, World ORT Director General and CEO, said: “The 70-for-70 mission was an ambitious project to mark the special anniversary of an ambitious nation.

“I am delighted to say that the preparations which went into the visit made it a great success, and our delegates were able to fully experience World ORT Kadima Mada’s work, and to understand how it benefits thousands of lives across Israel.

“Our supporters will return to their home countries buoyed by this experience and ready to explain to others how we are able to bridge the gap between ability and opportunity. It was a trip to remember for a very long time.”

After the excitement of meeting President Rivlin and getting the mission underway on Thursday, participants travelled north to the coastal town of Kiryat Yam to see how World ORT Kadima Mada is transforming the area through its schools.

The school – the biggest in Kiryat Yam with more than 1,400 students, including many new immigrants to Israel – encourages students to take part in dozens of hours of social action work every year.

A guided tour of Kiryat Yam’s Alex and Betty Schoenbaum Science, Educational, Cultural and Sports Campus at Mada Park included demonstrations of scientific experiments and a chance to see the site’s oceanarium, planetarium and sports facilities.

The mission’s Shabbat programme featured highlights including a visit to the home of David Ben-Gurion, Israel’s first Prime Minister, in Tel Aviv. Participants saw a film featuring recently discovered footage of Ben-Gurion from the 1960s. The highly emotional clips moved many of the participants to tears and was followed by a discussion with Ben-Gurion’s grandson, Dr Moshe Ben Eliezer, who gave an insight into the family life of the state’s founding father.

Continuing the programme on Sunday, the participants travelled to Be’er Sheva Technological College, where the diverse student population takes part in a series of World ORT Kadima Mada projects.

A fascinating session with students from Dimona’s YOUniversity after-school science and technology programme brought a chance for the mission delegates to take a closer look at robotics projects. One student emotionally explained the impact the work has had on his life and the way that learning about robots has helped him socially and educationally.

Avi Shalev, a former adviser to the Israeli Coordination and Liaison Administration to the Gaza Strip, gave a briefing on how innovation is affecting security in Israel, and explained how Israel is using new technologies to defend its borders.

Delegates emerge from the shelter in Netiv Haasara

But the rush to the bomb shelters in Netiv Ha’asara saw the session take an unexpected turn. One participant said the moment “really gave us a feel for living there and the experience of growing up in the area or bringing up children there”.

A farewell dinner at Kfar Silver on Sunday night brought the curtain down on a remarkable four days of activity. A range of food stations provided meals from all types of Middle Eastern cuisine, prepared by participants of an initiative which gives women from different ethnic backgrounds the chance to visit communities and work with local women to cook and prepare food.

The dozens of ORT supporters, major donors and friends who took part in the mission left Israel in the knowledge that they had taken part in a memorable and historic event, which will spur on their efforts to help the global education network achieve its goals.