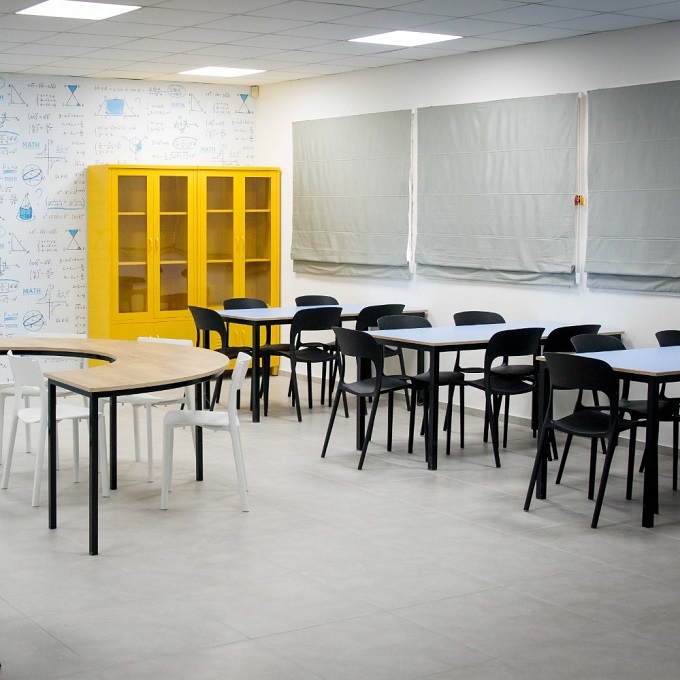 This past week we were delighted to join the celebrations at the launch ceremony for the D.Dan and Betty Kahn STEAM Center at the Rodman School in Kyriat Yam, Israel.

The D.Dan and Betty Kahn Foundation and World ORT have a longstanding relationship with the city of Kyriat Yam in developing and establishing STEAM education programs, from Kindergarten to 12th Grade.

The D.Dan Kahn Center was originally established 15 years ago as a science center to improve the opportunities for middle school and high school students. The center encouraged transformation in science education in the city.

The new STEAM facilities are built on the belief that in today’s ever-changing world, teachers and students need to engage in real-life multi-disciplinary scenarios involving concepts and ideas from science, technology, engineering, art and math.

Project architect Carmit Simhi Rokah said the area had been turned from ‘a closed space with turquoise walls and doors’ into ‘a flowing open space, which allows the different disciplines to work in collaboration and openness and different pedagogy to take place.’

Or Shoval from World ORT Kadima Mada will accompany the school principal and teachers on a three year pedagogical journey to incorporate the innovative STEAM pedagogy into their core curriculum.

D. Dan Kahn overcame severe financial hardship, strived to learn, worked hard to achieve success and ultimately gave back to the community that inspired him. He was the personification of ORT’s mission as an education network driven by Jewish values and innovation, preparing people and communities for meaningful, self-sufficient futures. He was the original supporter of the center, and the foundation in his name has continued the family’s support.

We extend our thanks to Kadima Mada Project Manager Dana Dahan, Carmit Simhi Rokah from Mekomot Architects and as always, to the D.Dan and Betty Kahn Foundation. Celebrations at the launch of the center