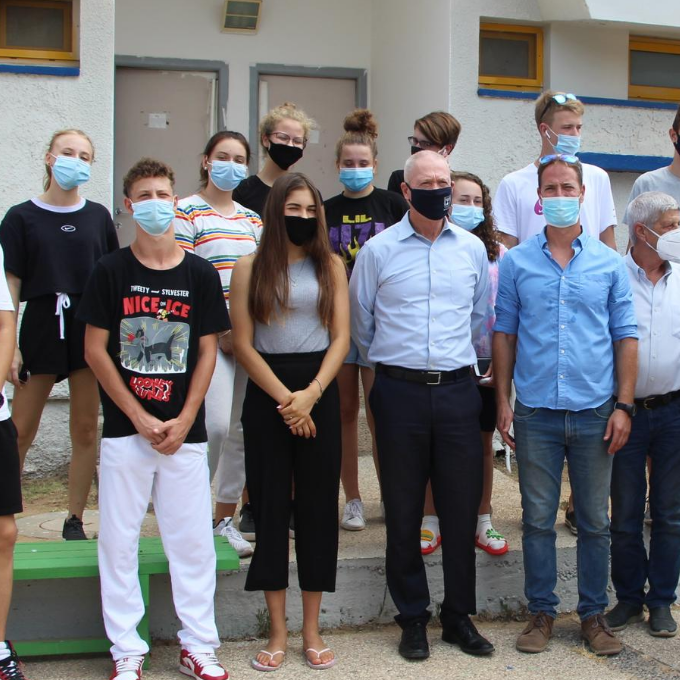 The growing reputation of Kfar Silver Youth Village under World ORT’s management has been rewarded with a visit by Israel’s Education Minister Yoav Galant.

The visit began with a short introduction to World ORT, to World ORT Kadima Mada and to Kfar Silver. The Minister was then taken on a tour of the Village, visiting the farm, the dormitories and the memorial wall for fallen soldiers from Kfar Silver. Mr Galant’s visit concluded with a meeting with a group of boarders including Na’ale students (who have moved from the Former Soviet Union ahead of their parents, in order to receive an Israeli education and settle in the country). The students shared their experiences of learning and living in the Village.

Moti Dotan noted the significance of the visit, saying that “this is the first time in 30 years that the Minister of Education has come to Kfar Silver. Minister Galant was excited to meet with the youth who are studying and living in the boarding school, some of whom came from around the world to study in Israel.”

Amos Gofer observed that “Minister Galant’s visit to the Village is a very significant statement regarding the importance of youth villages in general and Kfar Silver in particular. The visit was very successful and showcased the achievements of the Village and the great cooperation that exists between the Village, World ORT Kadima Mada and World ORT.”

Aviezer Segal added that “the visit of Minister Galant and his team from the Ministry of Education on the opening day of the school year is an important event and symbolizes the importance of World ORT Kadima Mada and Kfar Silver as part of the resilience of Israel’s youth. The Minister was very impressed by our story, which emphasizes the importance of putting our wonderful youth – a true mosaic of Israeli society – at the center of everything we do as an organization.”

The meeting with the youth was especially moving and the Minister heard how the boarders considered the Village their second home. He was impressed by the work of the Village staff led by Amos and his management team, and by the beauty of the Village. Mr Galant acknowledged Kfar Silver as “an exemplary place”, saying that it strengthens him to know that such a place exists and can stand as a role model for others.

World ORT Director General and CEO Dan Green, who spoke with Minister Galant on a video call during his visit, expressed his delight at the event, saying “the Minister’s visit is deserved recognition for the great advances made in recent years by Kfar Silver, working in partnership with World ORT and World ORT Kadima Mada. It is a chance to reflect on the sterling work that Amos and his staff continues to carry out and serves as inspiration for his team – and of course for the Village’s students – as the new academic year begins”.