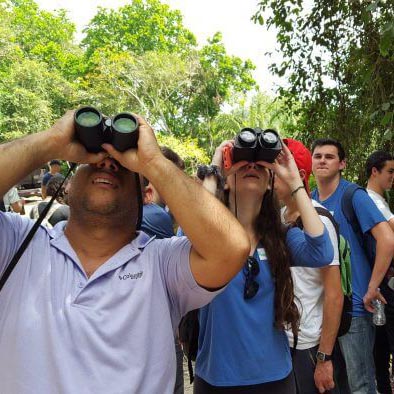 January… A new year and we have our eyes set on new horizons. But we can’t reach our destination unless we know where we’ve been. So let’s look back at the past 12 months and appreciate what we’ve been able to achieve together. Because without your support we wouldn’t have been able to improve as many lives as we did.

FRANCE: ORT Toulouse was ranked in the top three secondary schools in its region. “Most of our courses get a 100 per cent success rate, even in further education programmes.” >> Read more

ISRAEL: World ORT Kadima Mada celebrated 10 years of improving lives through education. “We have gone from an organisation which improves the physical infrastructure of schools, such as Smart classes and science labs, to one with the will and expertise to innovate in a way that is respected and trusted by the Ministry of Education.” >> Read more

PANAMA: Our inaugural Ecology Summer School was held in Panama – an exciting opportunity for 20 students from Latin America and Spain. >> Read more

WORLD ORT: ORT students around the world shared their projects which are making the world a better place as part of the annual Gina and Joseph Harmatz Award. >> Read more

WORLD ORT: We challenged our students to explain complicated phenomena, inventions and discoveries as part of our prioritisation of STEM education. The results show a deep level of understanding. >> Read more

FRANCE: ORT Marseilles was officially recognised as a digital pioneer. “We are really happy about this because we want to experiment with the flipped classroom model and in so doing help our students to fully realise their potential.” >> Read more

INTERNATIONAL: Our schools put the ORT network to good use by organising pupil exchanges. That’s how students from Mexico visited ORT students in Moscow, and vice-versa. Lucky them! “The students and accompanying teachers collaborated on robotics projects and learned so much together. But beyond that the children became immersed in their hosts’ culture and realised how different life can be.” >> Read more

INTERNATIONAL: Hundreds of people from 10 countries in the ORT family participated in asimultaneous challah baking event by video conferencing. A first in ORT history! >> Read more

FORMER SOVIET UNION: World ORT launches a $9 million campaign to support STEM educationin its network of 17 schools across the Former Soviet Union. Be part of it! >> Read more

ONLINE: We added Instagram to our social media presence – it’s a great way to keep in touch with our students. Our Instagram picture contest was a fun way to bring students and supporters together. It’s another way the ORT network uses technology to makes the world a village.

WORLD ORT: We launched a new management and leadership training seminar for ORT teachers and managers with the backing of the HH Wingate Foundation. Because a well-managed school makes better students. >> Read more